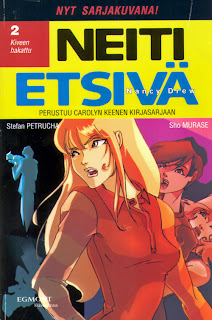 The first three titles from the Girl Detective Graphic Novels series were released in Finnish in 2007 (shortly after their English counterparts were introduced). I just received copies in today's mail and was happy to add them to my collection.

The books are published by Egmont and duplicate the format of the US versions. They also repeated the "neiti etsivä" nickname started back in the 1950s when the first Nancy Drew books were translated into Finnish. Conveniently, it roughly translates to "miss" or "girl" detective. The only change is that the heroine is called Nancy in the graphic novels, rather than Paula, as she was previously known in Finland.
Posted by Lea at 2:40 PM No comments: 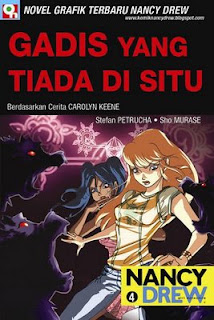 The first 4 titles from the Papercutz Graphic Novels series have been released in Malay by Pesta Buku Antarabangsa (translation: Carnival Book International). The release date appears to be April 2009. The series is called Komik Nancy Drew. They have reformatted the layout on the covers - I think I like this arrangement better than the US covers. It is more .... graphic!

This is the Malay edition of The Girl Who Wasn't There.
Posted by Lea at 8:53 AM 1 comment: